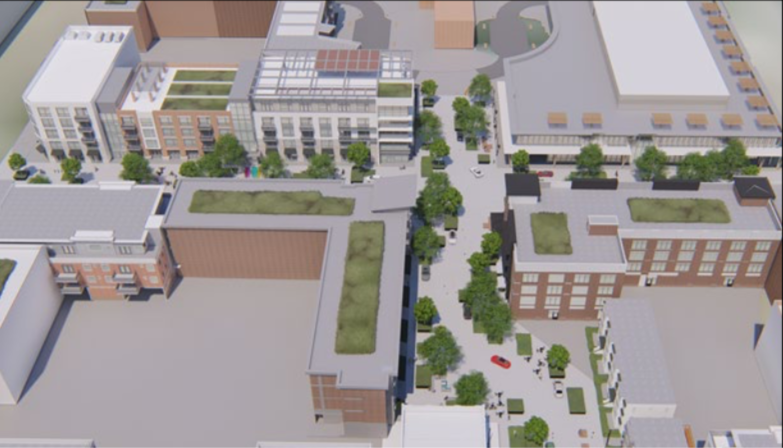 Salt Lake City leaders think they’ve found the partnership that will finally break the development deadlock on their properties in the Depot District in west Downtown.

An innovation district – owned, leased out, programmed and managed by the University of Utah – is the answer Mayor Erin Mendenhall’s Redevelopment Agency (RDA) has arrived at for its long-vacant 10.5 acre Station Center assemblage.

The Depot District is one of the most rapidly-developing areas of Downtown, hosting an impressive set of urban amenities, including the nexus of the city’s transportation network.

Historically, it’s been the city’s gateway for new arrivals, and that legacy remains today, despite steps at gentrification like the removal of the Road Home emergency shelter. Urban campers, for example, continue to populate curb strips and vacant lots along these liminal blocks dominated by the railroads and woven into the wall of I-15.

The RDA’s attempts to develop its (rather deep) pocket of the Depot District – the important stretch of 300 S between the Rio Grande depot and UTA’s Central Station at 600 West – have inched along for a decade with little visible progress.

That looks to change in a big way.

In a report to be presented to the June 9 meeting of the RDA Board of Directors (but postponed), agency staff outlined the latest terms of understanding between the city and the University of Utah.

Their conversations began as early as January 2020, revolving around the University of Utah establishing a presence in Downtown.

As a result, the notion of an innovation district centering on Life Sciences and Community Health seems to have gotten its walking legs.

The RDA is preparing to sell its substantial properties to the U, who will abide by specific RDA Station Center design guidelines as well as mandatory G-MU design review in the planning division. The report notes the U already has key properties under contract in the neighborhood, including a right of way for a 400 South UTA Trax corridor extension.

In the final agreement with the U, the city is also seeking a series of concessions to public benefits and “programmatic drivers” revolving around equity, affordability, and sustainability.

In return, the U will own, develop, and manage the district.

The mayor’s economic development initiatives, Tech Lake City and BioHive, will get some major propulsion from the Station Center innovation district agreement.

Room for start-ups that have graduated from incubation – at below-market rents – is on the city’s list. As is “programming that meaningfully closes the gaps between the City’s east and west sides by providing educational and/or job opportunities that support upward mobility.”

As well as the public market, still in tow as an RDA priority for the area. As momentum may be building to return the Rio Grande depot to a train station, the Downtown Alliance’s farmers market, located in summer at Pioneer Park and in winter at the Rio Grande, has renewed its search for a permanent space in the neighborhood.

Agreeing to such significant conditions will allow the U to buy the RDA’s land near or at market value, hire their own choice of developer(s), and reap in perpetuity the benefits of various rents on the property.

The city seems relieved to be off the hook for operational costs and responsibility to manage the space, which includes 300 South as a “festival street.”

Hoping to make the blocks feel different, something like lower Manhattan or Portland OR, G-MU zoning was put in place but hasn’t quite achieved that result – even with mandatory design review.

Will the RDA’s design standards on top of G-MU zoning, and its investment in creating new mid-block streets, create someplace special?

True to the RDA’s repeated intention statements for the area, Station Center innovation district’s urban form aspires to defy the usual scale of Salt Lake street scale. The city is hoping its nearly $10 million investment to build midblock streets will “create new transportation connections that prioritize the pedestrian and bicyclist over the car.”

The RDA is planning to spend its proceeds from land sales to the U on more infrastructure improvements, further heightening the district’s design and aesthetic qualities.

Ongoing cost will be assumed by the new land owners, the University of Utah. The report notes that the “U-of-U would use ground lease revenues obtained from sub-lessees to fund District programming and maintenance.”

The Administration’s briefing to the City Council (RDA Board) is yet to occur, but imminent. City council members will need to sign off on the strategy.

The report indicates that RDA staff are keen to get the wheels moving to meet the requirements to sell city property (“disposition”) sooner rather than later.

In fact, staff aspires to have a fully executed agreement in place with the U by the end of the year.

The U thinks it can have a developer ready to go for Phase 1, after an RFP process, by Spring, 2022 – only a year from now.