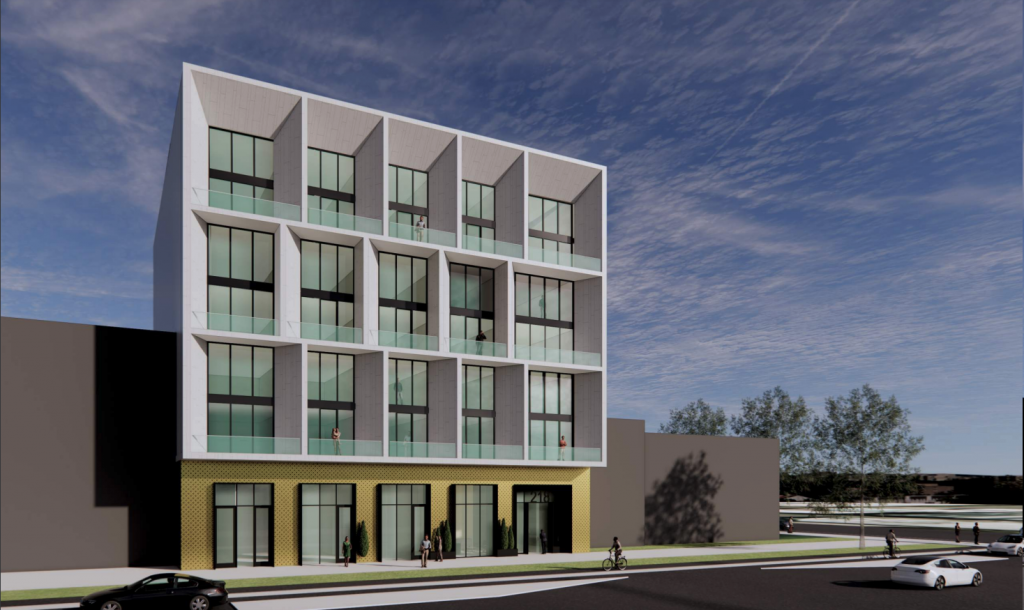 Builders plan to turn a vacant building into 43 new residences under a new proposal for a block of Broadway that is primed to see rapid redevelopment in coming years.

Axis Architects submitted preliminary drawings for the new housing at 218 W. 300 S., just east of the Hotel Broadway in Salt Lake City, at the site of a former Henrie’s Cleaners.

New renderings show an apartment building that would become only the latest in a quick influx of residences into the capital city core, where thousands of people will live for the first time in decades as projects continue to be built and proposed in what will be a large-scale revitalization of Downtown.

The early drawings show space for primarily one-bedroom apartments, a handful of larger units and about 1,000 square feet for ground-floor retail in the building that could kick off a transformation of the 200-300 block of Broadway if approved.

The developers say their project, with its added density of people and retail space, would add to the revitalization of Downtown that’s already teed up and underway.

“The livability of this area will be improved by providing additional housing units and commercial space, and removing the old defunct drycleaner,” the builders wrote in their application. “Our project will bring multiple housing choices, which aligns with the downtown plan.”

The new renderings at 218 W. Broadway show residents accessing 33 off-street parking spaces from a city-owned right-of-way off 200 West. being access from the rear (or north side) of the building.

They cited a lack of Downtown residential housing — three units per acre as of the 2010 U.S. Census — in its design review application with the city last week.

It’s true that Salt Lake City — like Downtowns across the United States — previously zoned and encouraged housing to be built outside of its urban core. But the area is entering a renaissance.

By our count, space for more than 5,000 new people is being built in the Downtown zone, with new buildings proposed and under construction at perhaps the fastest rate in recent memory.

That means more residents will have the opportunity to live close to the job and entertainment center of the region, with the promise of an injection of creativity and demand for commercial activity within the city core.

The Greek Orthodox Church of Greater Salt Lake City plans to demolish its mid-block La France apartments, dozens of affordable housing units that were built in the early 20th century.

A cluster of mixed-use development is wrapping up near the Vivint Arena near 300 W. South Temple. New high-rise buildings are rapidly being proposed and approved, and the city continues to feel the pressure of preserving its existing character while making space for new housing.