Zoning change for The Exchange headed to City Council 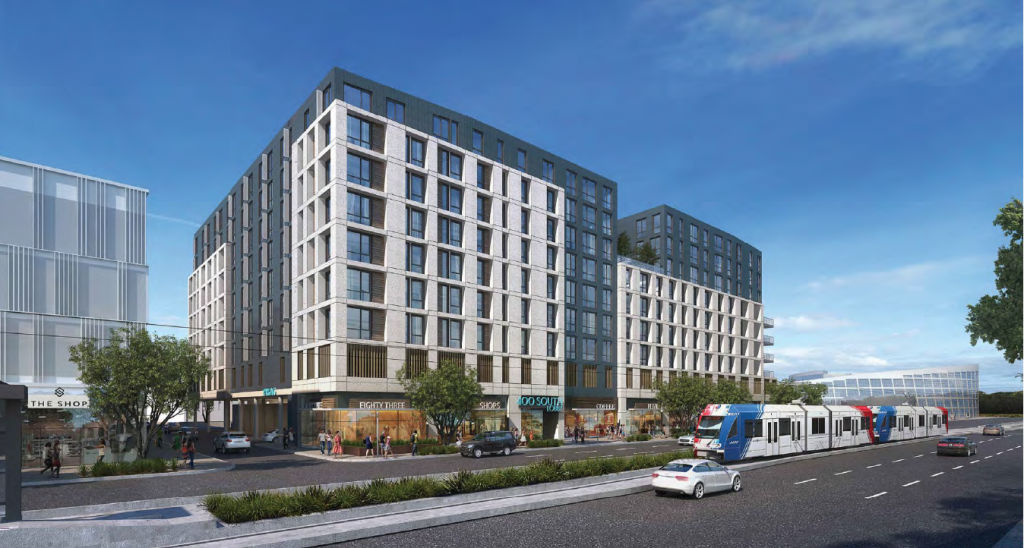 A large mixed-use, affordable housing development has cleared another hurdle after the Salt Lake City Planning Commission voted on Wednesday to forward a favorable recommendation to city council for a zoning amendment needed for the project to move forward.

The project, referred to as The Exchange, is proposed for the northwest corner of the 400 South block of 300 East replacing the former Barnes Bank and Salt Lake Roasting Company buildings.

The city is asking for a rezone of People’s Way, the city-owned private street that separates the Public Safety Complex from the Barnes Bank Building.  The parcel is zoned PL-2 (Public Lands) but the city would like to rezone it to TSAUC-C (Transit Station Area-Urban Center Station-Core), to match the zoning of the parcels to the north and east of the street.

According to planning documents, the rezone is necessary to allow residential and commercials uses to front People’s Way.  Additionally, the city wants to keep the street as a designated private street to allow for outdoor dining and food truck use, which is prohibited on public streets.

City officials announced the selection of Exchange proposal in July.  The project will be developed by local developers, Giv Development Group and Domain Companies, a New York City-based firm.

The nine-story building will consist of seven floors of residential space, with 288 residential units, above a two-story parking podium.  The podium will be wrapped by ground-floor retail on both 400 South and 300 East.  The developers have partnered with the International Rescue Committee’s Spice Kitchen business incubator program to run an international food hall and marketplace that will serve as the anchor of the retail component.

The second building will be five stories.  The portion fronting 400 South will include three floors of commercial office space above a one-story parking podium that will be wrapped by retail space on 400 South.  The office space will be anchored by “The Shop at Salt Lake City,” a 30,000-square foot co-working and business accelerator space. The Shop will offer programming aimed at stimulating entrepreneurship, small business development and community engagement.

The rear wing will consist of micro-apartment units above a parking podium and the “The Shop at Salt Lake City,” a 30,000-square foot co-working and business accelerator space.  According to the mayor’s office, The Shop will offer amenities and programming aimed at stimulating entrepreneurship, small business development, and community engagement.

The zoning request will need city council approval before the city will sell the land to the developers.  The developers hope to start construction fall of 2018.