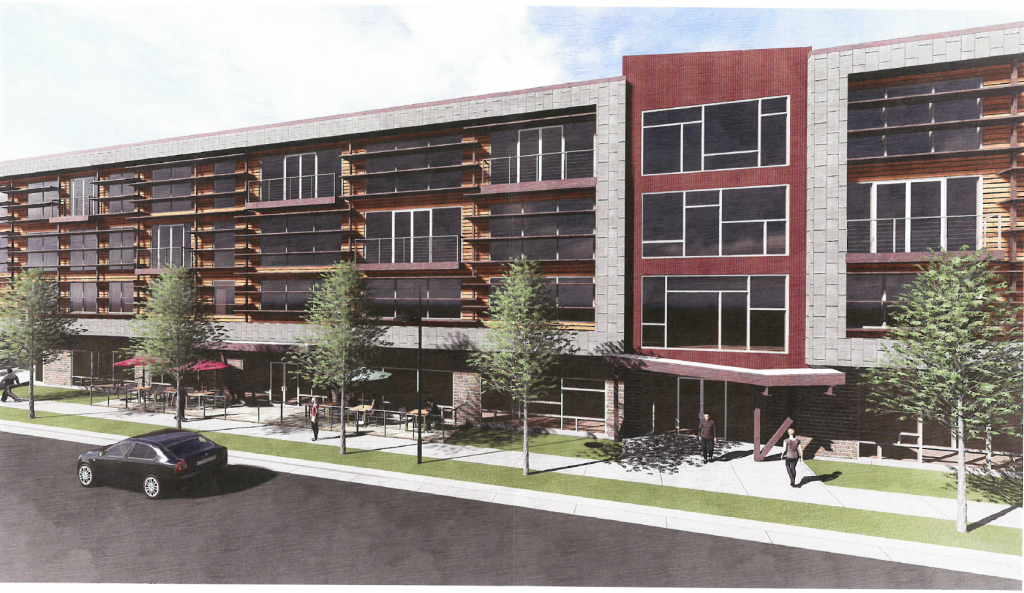 The urban growth on the 2100 South corridor is beginning to push further west, beyond the 1100 East and 2100 South intersection.  On Wednesday the Salt Lake City Planning Commission voted to forward a positive recommendation to City Council for a rezone for six parcels on the 500 East block of 2100 South.

The project was the second project on 2100 South to go before Commission on Wednesday.   Prior to the Commission’s favorable recommendation, the body approved a Conditional Building & Site Design Review (CBSDR) for the, 21 by Urbana Apartments, a five-story 126-residential unit project on the 1000 East block of 2100 South.

The developers, Myriad Capital, are requesting a rezone of the parcels from CB (community business) to RMU-35 (residential/mixed use).   The Commission is required to review the rezone separate from project specifics, but the developers stated that they intend to build a three-story mixed-use project with ground floor retail and 30-44 residential units on the second and third floors.

“What we are exploring is whether that housing will be for sale ownership or rental,” said Alec Harwin of Myriad Capital.  “With the limited height we are now pursuing the economics work better for for-sale housing.”

The parcels, just east of the 7-11 on the 500 East and 2100 South intersection, are currently occupied by CrossFit and boxing gyms and a single family home.

According to city planning, Anthony Riederer, there isn’t a significant difference in land use restrictions for the CB and RMU-35 zones.  Both zones allow for mixed-uses but the RMU-35 has larger rear yard setbacks.  Under the CB zone, the developer could outright build up to 30 feet with possibly 33 feet through a special exception with a rear yard setback of 10 feet.  The RMU-35 zone change would triple the required rear yard setback to 30 feet, but would allow building heights up to 35 feet.

“What is intriguing about it is that we really have enough parking for the retailers, restaurant use and potential owners of the units,” said Harwin.

Myriad cited the depth of the lots, at an estimated 125 feet, and the required 30 foot rear yard setbacks under the RMU-35, as reasons the rezone is ideal for the parcels and the neighborhood.

While the Liberty Wells Community Council voted in support of the petition, residents present at the commission meeting were predominantly against the change.  Several residents expressed concerns that the new development would damage their historic homes on East Redondo Ave.  Residents also testified that new development would negatively impact the neighborhood with increased traffic and less privacy.

“I don’t believe this fits in our neighborhood,” said one resident during the public hearing.

Riederer argued that planning staff felt that the rezone would better protect the residential homes on Redondo since it would create a larger buffer between development and homes with the increased required rear yard setbacks, with minimal height increases.

The parcels for the proposed mixed-use development are mere feet from the boundaries of the Sugar House Streetcar Corridor Master Plan area, which the Salt Lake City Council formally adopted earlier this month.  The plan rezones multiple parcels surrounding the intersections of 700 East and 2100 South and the S-Line streetcar corridor.  If Myriad Capital’s proposed project was built less than a block to the east it would be under the FB-SE (Special Purpose Corridor Edge Subdistrict) zone, which allows for building heights up to 45 feet.

The proposed development is a block from the 500 East S-Line streetcar station and is less than two blocks from both Sugar House and South Salt Lake’s emerging East Streetcar Neighborhood.

The zoning petition will now go before the City Council for a final vote.