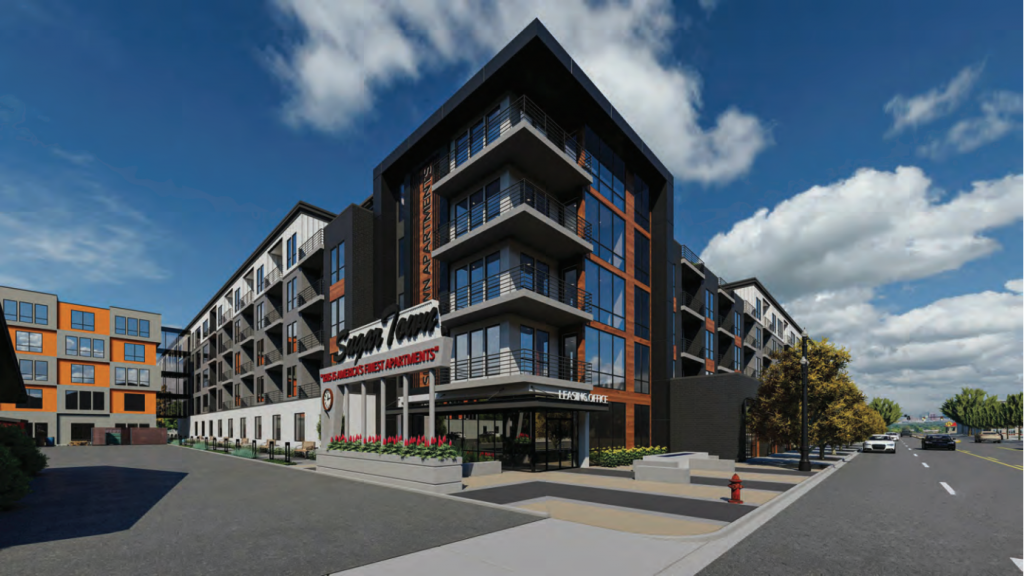 The new mixed-use apartment building on the western edge of the Sugar House urban core would be visually split into three under updated plans released by developers last week.

The Sugar Town apartments would still include 319 residential units centered at 850 E. 2100 S. if approved after extensive review and revisions this year.

If built, the development would effectively extend the rapidly urbanizing core of the neighborhood, adding hundreds more residents, a new liquor store, more commercial space and a solid handful of rent-restricted units.

Fifty-three of the 319 units — or 16% of the total project — would be rental price restricted, according to documents filed with the city. Another 39 units would be “micro” apartments, which would be affordable for renters willing to accept much smaller spaces.

The buildings would span the 660 feet between 800 East and 900 East, with the center core fronting 2100 South and two smaller buildings attached but visually separate and set back by parking lots and existing businesses that will remain.

Sugar Town would repurpose the historical sign from the Snelgrove Ice Cream plant that long sat on the site before being demolished earlier this year. It will be moved to the eastern edge of the property, a change from the original proposal that had it centered on 2100 South.

Pedestrians strolling down 2100 South will still have to contend with traffic and curb cuts from inbound and outbound cars from the main entrance to the building’s parking. The primary entrance will front 2100 South, with two additional entrances from 800 East and Commonwealth Avenue.

The buildings will include 393 total parking stalls: one for every housing unit plus 87 spaces for the public to use.

The buildings will include 404 total parking stalls: one for every housing unit plus 87 spaces for the public to use. They would also include tens of thousands of square feet of space that would be exclusive for tenants.

The commercial spaces spelled out in the developers’ application show space for a 10,000 square foot state-run liquor store and about 1,900 square feet labeled as “artspace.”

To break up the building, the designers used materials for the eastern and western flanks that are different from the main building. They also added midblock walkways allowing free passage between Commonwealth Avenue and the parking lots that front 2100 South. Renderings show glass skyways between the three buildings, presumably to allow for easy access to the tenant amenities.

The developers have asked for a rezone (from commercial corridor to Central Sugar House Business District 1 (CSHBD1).