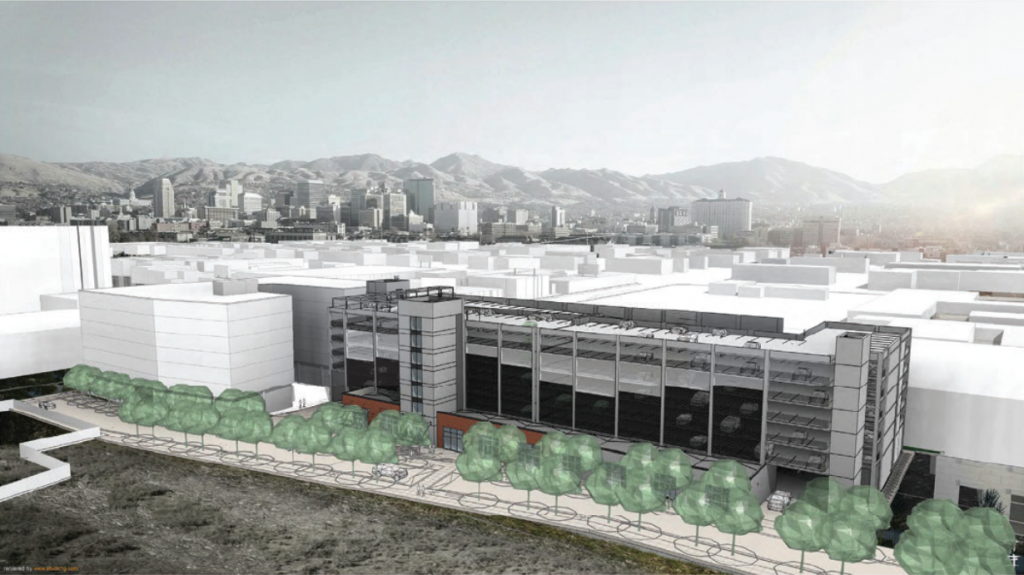 The Salt Lake City-based developer that’s looking to jump-start development in the Granary District won approval on Wednesday night to build a 90-foot tall parking garage with space for 976 stalls.

A few members of the Planning Commission questioned whether the structure is at odds with broader city goals to move away from a long era of car dominance. But the developer could have built a 60-foot structure without permission, and the commission moved to approve the taller building at its meeting Wednesday night.

Developers say the structure would support an existing, 330,000-square-foot office space that’s already halfway built and leased out, plus part or all of two new housing structures planned for their sprawling property holdings in the area near 650 S. 500 W.

The garage would help to consolidate parking for what will be a rapid onslaught of housing and office space in the area, said representatives for Q Factor, the development group whose owners jumpstarted development in what is now a popular Denver neighborhood and relocated to Salt Lake City to do the same in the Granary.

Q Factor, which said it prioritizes adaptive reuse for the industrial Granary District, is about halfway done with what it calls Industry SLC (the same name as the catalytic project in Denver’s RiNo neighborhood).

The office building is expected to have over 1,200 people each day, plus visitors. A planned apartment building north of the incoming parking garage would feature over 200 units targeting rents attainable by people making 60-80% median income (or single people making $39,000-$50,000 annually).

Residents in that building and in a future market-rate apartment building southwest of the parking structure and fronting 500 West and 700 South would partially use stalls in the structures, said Jason Winkler, who co-owns Q Factor alongside his wife, Ellen, the firm’s design leader.

The developers are planning to activate Elder Court, a privately owned but publicly accessible street running north-south midblock between 700 South and 600 South and passing by the future parking structure.

A new pedestrian walkway would connect 500 West to the parking garage, and Q Factor representatives said they’re coordinating with property owners immediately east of the parking garage on continuing a walkway through to 400 West.

That would effectively split the Salt Lake City block into four quadrants, a dream among those looking to make the capital city more walkable despite its long blocks.

Still, adding 50% to the allowable height of the parking structure gave heart burn to one commission member.

“We are embedding, in a way, a continuation of the auto-oriented systems that we have been trying for a long time to work through,” said Brenda Scheer. “I know that although the transit isn’t there yet, the (additional) buildings are also not there yet, so I’m a little confused about why I’m not seeing a master plan at all.”

She and others noted the possibility of transit being extended along existing tracks on 400 West, as the city has tried to do in the recent past. But those are just concepts, as this point, another member countered.

“If we were on 4th South with an active TRAX line we could question it,” Adreinne Bell said, “but who knows if and when transit is going to reach this part of the city.”

Scheer was the only voting member of the commission to vote against the proposal, which passed 6-1. Q Factor doesn’t need any other approval before pulling permits for construction.