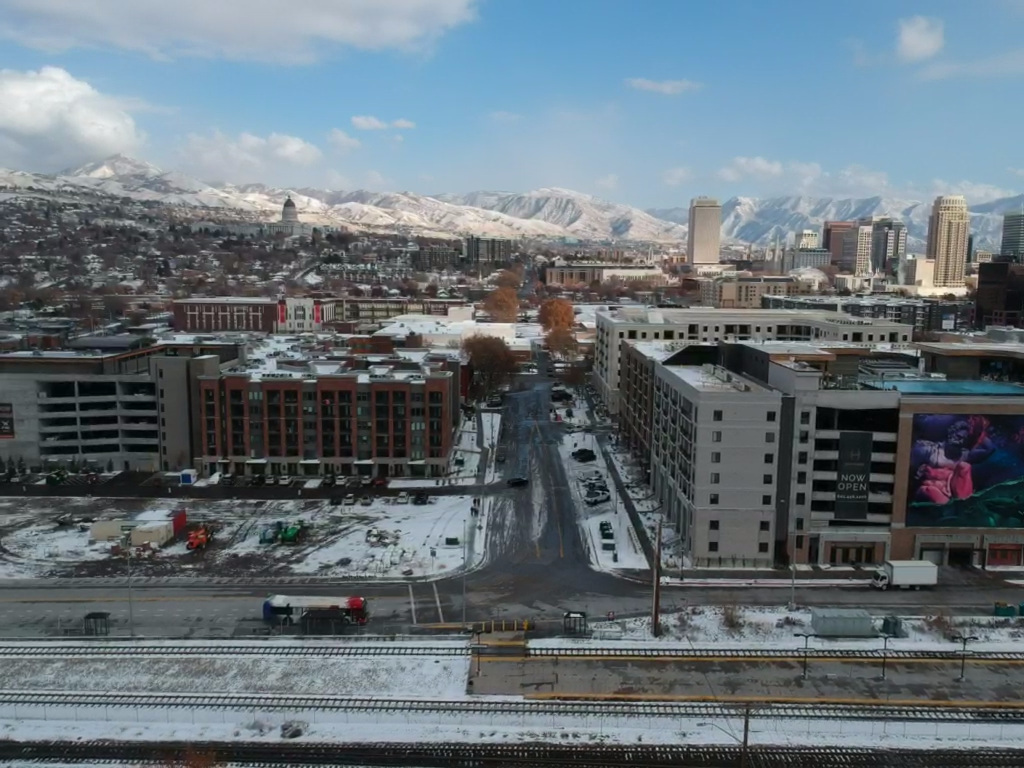 If you haven’t meandered through the new apartments between 400 West and the FrontRunner tracks recently, it may surprise you to visit the residential pocket that’s been created where one didn’t exist five years ago.

Space for thousands of residents has been built, with hundreds more on the way to the area between Downtown and the Marmalade neighborhood, where builders have added new urban corridors and site lines in the city that are worth visiting.

What’s not clear is whether the new buildings offer enough for those who don’t rent the new luxury apartments in the area near transit stations at 490 West north of North Temple.

Another newly proposed residential-only apartment building follows the recent trend for the area.

The latest offering would include 393 studio, one- and two-bedroom apartments plus 28 townhome units on 3.41 acres between 300 and 400 North. (The project was originally to include less than half as many new units.)

The Ice House apartments would include a seven-story podium wrap building with two townhome pads. It would be exclusively residential and include seven tiered levels of parking.

Ice House appears to match the substance of its neighbors in what the developers dubbed the Hardware District.

Residents of the Hardware District

The Hardware East and West apartments and 4th West apartments have already been built. Vacant land at 200 North and 490 West is slated to become 300 luxury micro and studio apartments in the Salt Lake Crossing, which the Planning Commission approved in April.

Residents in this area belong to the Capitol Hill community council, which includes the Marmalade and Capitol Hill neighborhoods north and west of Downtown.

The apartments already built have attracted working professionals who either commute out of town or into Downtown. The transit options from UTA provide options as convenient alternatives to driving.

The developers have jumped on transit area zoning, which is the highest intensity zoning in the city. The zoning intends to attract a mix of uses near transit stations.

But recent visits to this quickly developing four-block stretch shows buildings manicured with attractive street-level units but not many reasons or space for outsiders to visit.

The buildings themselves are attractive, and the Hardware buildings and rowhouses frame an urban street corridor that, while short, creates a rare and beautiful sight in Salt Lake City.

What else is needed?

Along with an update on the construction, this post simply asks whether the city and surrounding neighborhoods are being well-served with what’s already come to the area.

The primary developer had planned for a 10-story, 200,000-square-foot Hardware Station building east of the TRAX and FrontRunner stations. But that project hasn’t moved since 2016.

Renderings from 2016 show the new Class A office space and what appears to be open space, which could offer a public amenity if the plans are carried out.

Until any public amenities, if any, are added, residents in the buildings and the ground floor focus bring eyes to the streets. The 4th West building now includes a full-service grocery store that is popular and fills a need for the wider area. A dry cleaner next door closed in November and leaves a vacant retail space.

Until then, only the new buildings’ residents can enjoy permitted parking on streets around the buildings and a private dog park west of 4th West apartments that residents access via their room keys.

None of the proposals in the works includes significant public offerings.

The new residential buildings are being added to an area that already has historic creative office space, including the namesake Hardware building and another historic building that’s home to the Disability Law Center but is listed for sale.

The buildings are worth looking at either as a place worth living or simply because they’re new additions to the city. Whether they add enough for the city or if that responsibility falls onto the next builder is for others to decide.

July 23, 2018
There wasn’t much development happening in the area when the Guadalupe North Temple TRAX Station opened next to the North Temple FrontRunner Station in...
Read More