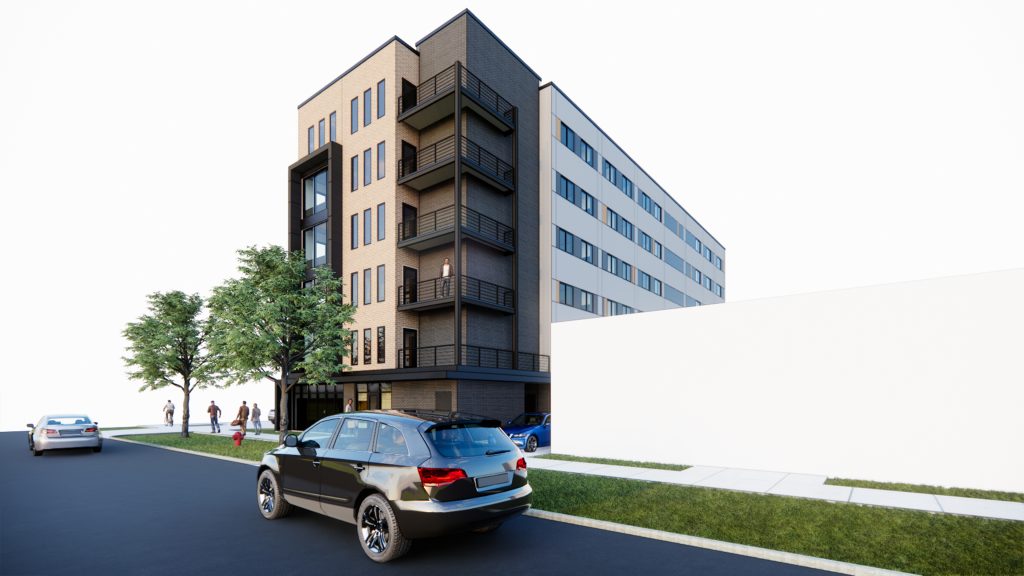 The two story apartment building at 670 S West Temple completed in 1906 is the last remnant of old Salt Lake on its block.

Now mostly parking lots, the block was re-scaled in the automobile age by the state highway department (UDOT), which turned West Temple Street into Route 270, from 400 South to the 900 South Interstate ramp. UDOT also took over 400, 500, and 600 South west of State Street, and repurposed them, too, into dangerous arterials with speeding cars, where few pedestrians dare to tread.

The most active land uses (besides surface parking) on the block between 600 and 700 South, West Temple and 200 West, currently are a full-service car wash, two gas stations, a high-rise hotel being converted to micro-apartments, and a small shopping center.

One of the smallest lots on the block, .19 acre, currently hosts a two-story apartment building at 670 South. It will be demolished for a new residential structure to provide 50 new units, called The Hank.

Locals Snowy River Development, based in Kaysville, have submitted at the city for permits for a 50-unit market-rate apartment building at 670 S West Temple that will replace the 1906 structure that looks to hold six to eight units.

The project’s impressive density – 263 units/acre – is being achieved on D-2 zoning. Its five studios and 45 one-bedroom homes would normally require a .5 to 1 unit parking ratio. But since the new 600 South Trax station has opened, The Hank will benefit from a reduced off-street parking requirement.

Only a block and change away from the new station at 650 S Main, the new apartment project on West Temple is within the ¼ mile radius to enjoy a 50% reduction in required parking.

The architect, Jarod Hall from di’velept design, a Building Salt Lake Sponsor, has structured the building’s 18 parking stalls on ground level, behind the street front. That’s a .36 to 1 ratio for the 50-unit building.

Given the narrow width of the lot, the ground level will contain only building entrance functions and a bike storage room, Hall told us in an email.

The Hank will contribute to the gradual re-population of south Downtown, a goal envisioned in the city’s master plan for the area. At this point the barriers to redevelopment seem less regulatory and more about the area’s attractiveness to people who want – and need – to move around without a car. They continue to face opposition from UDOT’s design of the area’s streets.